Unsettling Loss: What is killing the men of 6th Marine Regiment 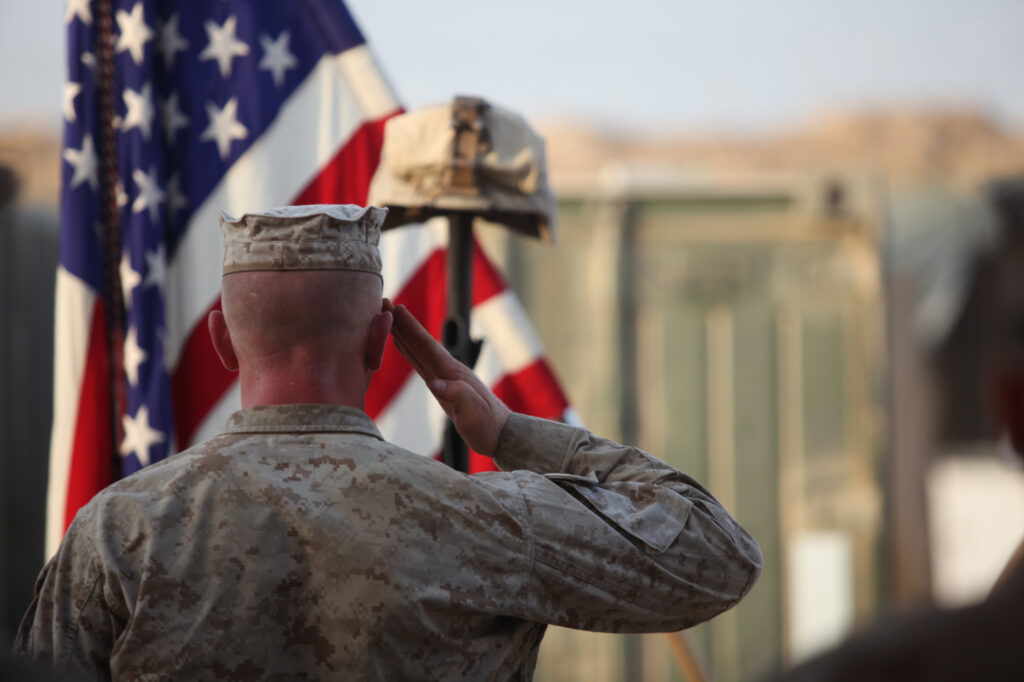 On a beautiful spring day in Houston, a young man walked into the hospital and into the elevators. A woman asked the young man “What floor?”, he replied, “Seventh please”. As he exited and walked toward the double glass doors baring the name “MD Anderson Gastrointestinal Cancer Center”, he paused, took a deep breath in, and bowed his head as he exhaled and regained his composure.

He stood tall, not in height but in stature, a United States Marine, just turning 29-years old. As he approached the desk, he was informed of the strict, ‘No Visitors’ policy recently enacted due to the pandemic. He replied, “I am not here as a visitor, I am here as a patient”.

Why would a perfectly healthy Marine be diagnosed with such a rare form of bile duct cancer at 29 years old? His cancer was the same that claimed the life of callsign HUNTER7, the man himself, Army Sergeant Major Rob Bowman at 44-years. Contrary to SGM Bowman, this young Marine hadn’t deployed to Iraq or Afghanistan. Instead spent time on the USS Iwo Jima, serving in the Mediterranean and Red Seas, the Indian Ocean, and the Persian Gulf as an infantryman of the 3rd Battalion, 6th Marine Regiment.

“This must be a freak occurrence”, I thought.

While Philip sat in his chair for chemotherapy in Texas, a fellow Marine faced a similar battle a few states north in California. Thirty-six-year-old Ben Griswold, a longtime friend of the foundation was an upbeat kind of guy, an “old-school” warfighter with three combat tours over a four-year period. An infantryman serving within the same 6th Marine Regiment as Philip, but different battalion, 1st battalion. After meeting Ben, who went by “Grizzy”, we found he had been battling two types of cancers since May of 2013, stage IV Non-Hodgkin’s Lymphoma and Acute Myeloid Leukemia. I remember speaking with him about what he thought caused this:

“Well, when I deployed during the Invasion of Iraq, our entire platoon was hit with yellow-cake depleted uranium at Tuwaitha Nuclear Research Facility, and I’ll never forget that pungent smell that anchored into my nose and burned down my throat and almost immediately I felt it in my stomach, I thought I bit my lip because of the blood-like iron-tasting tinge it left in my mouth… We had some smaller burn barrels too (pictured).

The same happened during my deployment to Kandahar in 2004 and again in Fallujah in 2005. We had taken a lot of fire during my second deployment to Iraq. Constant mortars, rockets, explosions, I can’t imagine all of the exposures we had taken on then.”

Around the same time Grizzy was diagnosed in 2013, another 6th Marine Regiment warfighter, Navy Corpsman, HM3 Adam Jarboe was facing his own medical troubles. Known as “Doc Jarboe” was stationed with the Navy in Mississippi, three years into marriage, and a recent introduction to fatherhood – he was enjoying life. Doc Jarboe had racked up three combat deployments as a Corpsman attached to 6th Marines and had just returned from Marjah, Afghanistan months prior. The deployment was one of the most combat-riddled deployments in Afghanistan, Doc Jarboe was kept busy and because of his exemplary skillset and service, many Marines survived that deployment and returned home to their families.

In the early spring of 2013, just a few weeks after returning home, Doc Jarboe had noticed some odd symptoms, believing they were most likely related to the concussive blasts and mild traumatic brain injuries from constant combat in Helmand Province. Doc Jarboe was only 26-years old, and lived a healthy lifestyle, but something wasn’t right he thought. Like most healthcare providers, he placed the health and wellness of others before his own, but a few weeks with no relief, he went to his doctor.

And everything else became moot around him. A married man, a newly made father of a beautiful baby girl and a warfighter who had survived countless firefights and saved many lives. How could this be? Brain surgery was required – immediately.

Anaplastic astrocytoma is a rare form of brain cancer that affects approximately 1 per 300,000. Exposures to radiation and chemical agents like those in jet propellants and firefighting foams are often found in Marine Corps MRAPs. Doc Jarboe was floored as was his care team. Because of the rarity, his treatment regimen was up in the air. Finally, he was sent to the Robert Tisch Brain Tumor Center at Duke University, one of the best in the world – where he would begin oral chemotherapy and six weeks of radiation.

By March 2014, Doc Jarboes’ treatment was on the upside, no new brain tumors were spotted on his MRI, but would continue chemotherapy moving forward, this was the best possible news the Jarboe family could have received considering the initial tumor was the size of a baked potato. Unfortunately, this luck would run out, as time went on his imaging began to show increasing signs of spreading, by June 2017 he was back in the operating room. By August 2017, his brain cancer had upgraded to a stage IV glioblastoma.

Cancer is relentless, as time moved forward, his cancer grew, and by early January 2019, Doc Jarboe would face seizure after seizure, something that would become a new normal.

An Infantry Marine who had enlisted in 2002 beginning his career protecting nuclear submarines would deploy across the world, that is the hook, line, and sinker we get in the military right? See the world? Joey Harms had visited Europe, Africa, and the Middle East all over a few years training local military organizations on helicopter inserts and ground patrols before heading to Camp Lejeunes’ 3rd Battalion, 6th Marine Regiment in 2009.

His role at 3/6 Kilo Company was a squad leader, his mission was to prepare his roster of newly-made Marines into designated marksmen, experts in patrols and tactics as they prepared for their upcoming deployment to Afghanistan for the Battle of Marjah – a historic battle in the Global War on Terror.

Day one in Marjah, Afghanistan, Sgt. Harms was found unconscious after a danger-close airstrike caused the building he was inside to collapse while he was carrying out a medevac mission. But of course, it didn’t prevent him from leading his Marines he had worked relentlessly to train up for this historic battle. Seven months later he returned home from deployment. Leaving less than a year to relax and recover, newly promoted SSgt. Harms, like Doc Jarboe prepared for round two in Marjah, redeploying to Combat Action Post Wakil Wazir.

Months after returning from his second Marjah rotation, SSgt. Harms had constant pain, one he didn’t take to be more than anything other than a pulled muscle while deployed, but instead of getting better with time, the pain worsened. Twenty-nine-year-old Joey Harms was told that his pain was appendix cancer that had spread through his organs and limbs.

His life had changed that day, from countless surgeries, seven types of chemotherapy, ungodly amounts of radiation therapy, infection after infection, and constant pain. SSgt. Harms was transferred to Wounded Warrior Battalion – East at Camp Lejeune with his wife and two young children.

In November of that year, 24-year old machine gunner, Andrew Maxey was misdiagnosed numerous times with a typical viral infection and discharged back to his barracks. After two weeks of being told he was just “sick”, it took him going off-base to a civilian hospital where he received the diagnosis of lymphoma (pictured).

Not just any type of lymphoma, but a rapid progressing form that left him on borrowed time – Twenty-seven days to be exact. The newlywed Lance Corporal, Andrew Maxey of 3rd Battalion, 6th Marine Regiment died two days before Christmas after suffering from strokes related to his cancer.

A couple of weeks following LCpl. Maxeys’ passing, Marine veteran Ben “Grizzy” Griswold passed away at 36-years old from complications and an infection he couldn’t kick on January 29th, 2021, leaving behind his queen, Jessica, and his three beautiful children.

One day later, we remembered Navy Corpsman, HM3 Neal Adam Jarboe on the second anniversary of his death as he passed on January 30th, 2019, from brain cancer.

And today, May 22nd, 2022, we write this in memory of Marine Corps Corporal, Philip Moore who passed away at 30-years old one year ago today.

Unfortunately, these are not rare incidents, the list of Marines from 6th Marine Regiment who have fought cancer during the post-9/11 era and lost their battles, as well as those currently fighting day in and day out occur behind the scenes. We ask you take priority in your health, no matter where you served, or when you served. Make it your mission to #UnderstandYourExposures – utilize our educational page, reach out to your VA Environmental Healthcare Coordinator and get screened.

If you need help and do not know where to turn: reach out to us, we have a dedicated immediate needs program for medical concerns, cancer support, treatments, second opinions. We are here for you.

These are the stories that do not make the news. The Six of 6th Marine Regiment.